A Flower From Heaven 2: A Perilous Journey

Never lose faith in what you believe in. 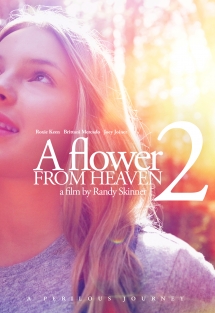 A 13-year-old girl whose mother is expected to pass away because of breast cancer within the next few days is causing the neighbors kids some concern. Naomi her 13-year-old daughter is a born-again Christian, but the mother no longer believes in God. Her daughter is desperately trying to convince her mother to change the way she thinks before she dies. The kids are out in the front yard shooting a church play to show the following Sunday during worship service. Using only homemade equipment, a makeshift microphone salvage from a karaoke machine and attaching to a mop handle. A tripod made out of three strips of wood and held together with a string. A film slate made from a school clapboard. A 14 dollar camera bought at WalMart and a roll of masking tape to put it all together. Each time Naomi, hears something from the play about salvation she will drop her microphone pole and run to her mother's side with the new information desperately trying to convince her mom to accept Christ before she passes away. The mother will continue to resist her daughter's message of salvation until God himself begins to intervene.