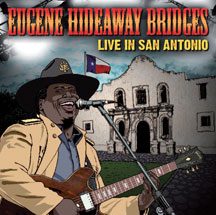 Eugene is a nomadic musician living his life on the road. His home is wherever the next performance takes him and every year this is from America through Europe to Australia, with many stops in between. Born in 1963, the son of the blues guitarist Hideaway Slim, Eugene is the fourth child of five. His mother was from the Bullock family, the same as Anna Mae Bullock better known as Tina Turner. Eugene claims he got his guitar skills from the Bridges side and his voice from the Bullocks. To follow the four CDs recorded with a full band since 1998, his last self titled release Eugene 'Hideaway' Bridges featured Eugene playing solos and duos with friends and fellow musicians who he has met on the road. This CD was nominated for two prestigious 2008 US Blues Music Awards. After many requests for a CD that captures the Eugene live sound enjoyed at festivals, theatres and clubs all over the world; March 2009 saw Eugene and his band in San Antonio, Texas. With Seth Kibel Tenor Sax, Justine Miller Trumpet, Bobby Baranowski Drums, Eric King Bass and David Webb Keyboards and Organ, you now have the real deal, LIVE.