An eclectic, retrospective collection of thirteen of Eugene Bridges own songs and four covers. 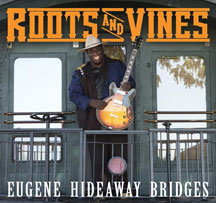 Born and raised in Louisiana, Eugene Hideaway Bridges is the son of Preacher Othineil Bridges Sr, also known as blues singer and guitarist Hideaway Slim. Eugene's musical foundation was built on Gospel and Blues, singing, playing guitar and bass for numerous gospel groups as he was growing up. Eugene was also influenced by many other styles and musicians, such as T-Bone Walker and Sam Cooke. Turning fifty in 2013, Eugene wanted to put together an eclectic, retrospective collection of thirteen of his own songs and four covers. Moving from a traditional song learnt in church as a young child, to songs about his life, travel, lost loves and a treasured 1981 Datsun 720 truck Nelly Bell!