A Small Town In Texas

After serving three years in prison, a young man's hopes of reuniting with his sweetheart and baby are dashed by the local Sheriff. 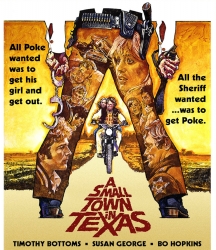 After serving three years in prison, a young man's (Timothy Bottoms; The Paper Chase, Johnny Got His Gun, Rollercoaster) hope of reuniting with his sweetheart (Susan George; Straw Dogs, Dirty Mary Crazy Larry) and baby are dashed when he discovers that the Sheriff (Bo Hopkins; The Killer Elite, Sweet 16, The Fifth Floor) has taken up with his girlfriend. Considering the Sheriff framed him in the first place, the young man is now out for vengeance. Directed by veteran stuntman Jack Starrett (First Blood) and also starring John Karlen (Dark Shadows, The Dark Ride, Daughters of Darkness), Art Hindle (Raw Courage, Black Christmas, The Brood), and Morgan Woodward (Battle Beyond the Stars, Moonshine County Express, Speedtrap). Now watch this film from a brand new HD scope-ratio master.

Southern towns may be small, but they see a lot of action.