Strip Nude For Your Killer 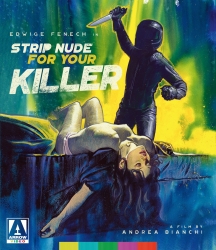 As the 1970s wore on and audiences began to tire of the tried and tested giallo formula popularized by the thrillers of Argento, Fulci and their contemporaries, filmmakers sought to reinvigorate the ailing movement by injecting elements from other genres. Some took inspiration from the then-burgeoning crime thriller movement, with tales of organised crime and corrupt police officials... while others decided to sex things up by crossing serial killer thrills with salacious softcore antics. A spate of highly sexualized murders is rocking a prestigious Milanese fashion house. Ambitious photographer Magda (Edwige Fenech, Your Vice is a Locked Room and Only I Have the Key) and her on-off boyfriend, love rat Carlo (Nino Castelnuovo, The English Patient), team up to crack the case. But, with the motorcycle helmet-wearing killer clearing bearing a grudge against the agency's employees, it's surely only a matter of time before they too end up feeling the force of his wrath... So roll up for a Euro cult experience like no other, with kitschy fashion shoots, back alley abortions, blow-up sex dolls and some very indelicate humor, as one of the most notoriously sleazy gialli ever produced gets the red carpet treatment from Arrow Video!

Undeniably provocative in its overtly sexual themes and even presentation. Arrow has provided a release with significantly improved video and a host of very enjoyable supplements. Recommended.

...Trumps all previous releases with an outstanding A/V presentation and quality extras. For giallo and exploitation fans, it's definitely one worth picking up. Highly recommended!