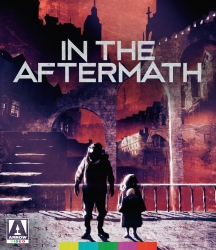 Following in the footsteps of Francis Ford Coppola and Peter Bogdanovich, Roger Corman protégé Carl Colpaert (The Crew) made his directorial debut by combining repurposed excerpts from a foreign film - in this case, Mamoru Oshii's (Ghost In The Shell) spellbinding 1985 anime Angel's Egg - with new live-action footage shot in America. The result is In The Aftermath, a haunting post-apocalyptic vision like no other. In a radiation-soaked wasteland, two surviving soldiers, Frank and Goose, search for essential supplies amid the rubble. After a violent confrontation, Frank is haunted by visions of an angelic young girl holding a giant egg, herself a refugee from another world altogether. Could the egg be the key to saving both their worlds? A unique mash-up of 1980s B-movie nuclear paranoia and hauntingly lyrical animation, In The Aftermath is presented in a stunning new restoration that highlights Oshii's visionary genius and Colpaert's low-budget ingenuity.