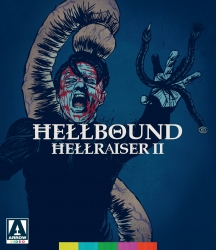 Picking up right where Hellraiser left off, Hellbound: Hellraiser II expands upon the terrifying universe created in Clive Barker's original film - taking the story into the very depths of Hell itself. Having escaped the clutches of Pinhead and the demonic Cenobites, Kirsty Cotton (Ashley Laurence) awakens to finds herself detained at the Channard Institute, a hospital for the mentally ill. But her torments are far from over - the chief doctor at the institute is determined to unleash the powers of Hell to achieve his own twisted ends. Hellbound: Hellraiser II is one of the most celebrated horror sequels of all time, offering a vision that is both more gruesome and fantastical than its predecessor.

Let's face it, most sequels suck, but Hellbound: Hellraiser II gleefully eviscerates this notion, offering a vision that is both more gruesome and fantastical than its predecessor.