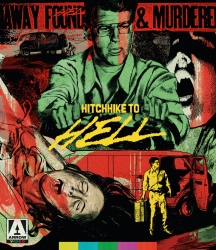 Be careful who you hitch a ride with! All roads lead to terror in Hitch Hike to Hell, the delightfully sleazy cautionary tale from cult director Irvin Berwick (Malibu High, The Monster of Piedras Blancas). Howard is a mild-mannered momma's boy whose job running deliveries for a cleaning agency affords him a lot of time out on the road. It's not until he picks up young women who've run away from home that he transforms into a twitching, homicidal maniac, hellbent on meting out punishment for their "transgressions". Can the cops put a stop to Howard's demented spree before he claims yet another victim? Influenced by the depraved crimes of the likes of "Co-ed Killer" Edmund Kemper, Hitch Hike to Hell is a bona fide American nightmare from the vaults of legendary exploitation producer Harry Novak (The Child, Toys Are Not for Children).

A sun-dappled, motorized amble to depravity and death, HITCHHIKE TO HELL is primo California scuzz from the waning days of widespread hitchhiking... Highly recommended for fans of bottom-of-the-barrel (in the best way) cult cinema.