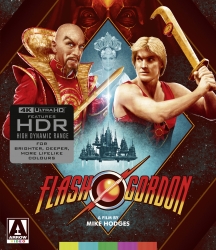 PATHETIC EARTHLINGS... WHO CAN SAVE YOU NOW? Super producer Dino De Laurentiis (Dune, Barbarella) brought Alex Raymond's beloved cartoon strip and the long running movie serial to the big screen with celebrated director Mike Hodges (Get Carter, Black Rainbow) at the helm, in a delirious space opera, where Flash is King of the Impossible! Merciless Emperor Ming (Max von Sydow) decides to wreak havoc on Earth in a moment of cruel boredom. Boarding a rocket as a means of escape, star quarterback Flash Gordon (Sam J. Jones), Dale Arden (Melody Anderson) and Dr. Hans Zarkov (Topol) find themselves on Mongo. Taken prisoner Flash must save Dale from becoming Ming's concubine, avoid the amorous intention's of Ming's wicked daughter Aura (Ornella Muti) and unite the warring Kingdoms of Mongo. With endlessly repeatable dialogue, inimitable camp style, the sonic stylings of Queen and a delightful band of characters and actors playing them it's no wonder Flash Gordon has become one of the most beloved sci-fi spectacles of its era with directors such as Edgar Wright, Taika Waititi and Seth MacFarlane paying tribute to it in their work.

This new version offers a riot of color and detail that I had never noticed in previous home video releases. As tends to be the case with Arrow, the supplemental package is outstanding and some of the non-disc swag in this Limited Edition is very enjoyable. This augurs well for Arrow and 4K UHD, and I'm excited to see what other films the label may decide to give this deluxe treatment. Recommended.

A gem from start to finish. For fans of Flash Gordon, this one is not to be missed.

A boon of a release... You get an excellent A/V presentation, a slick package with some decent swag items, and a metric ton of bonus features... Well worth adding to the collection. Highly Recommended.

The presentation is outstanding and I had no idea the film could look this wonderful... It’s a set that will make die-hard fans very happy.

A strong-looking 4K transfer and there are plenty of special features to appease hardcore fans. Gordon is alive, and he’s looking better than ever.