The Day The Last Flower Dies on Earth This Incredible Mission Began! 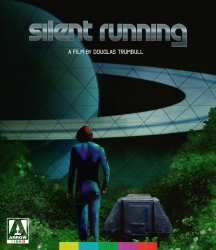 In 1968, visual effects pioneer Douglas Trumbull (The Andromeda Strain, Close Encounters of the Third Kind) contributed to the ground-breaking special photographic effects of Stanley Kubrick's 2001: A Space Odyssey. Four years later, he stamped his own indelible mark on the science fiction genre with his mesmerising directorial debut - Silent Running. In the not-so-distant future, Earth is barren of all flora and fauna, with what remains of the planet's former ecosystems preserved aboard a fleet of greenhouses orbiting in space. When the crews are ordered to destroy the remaining specimens, one botanist, Freeman Lowell (Bruce Dern, The 'Burbs), rebels and flees towards Saturn in a desperate bid to preserve his own little piece of Earth that was, accompanied only by the ship's three service robots. Featuring a captivating central performance by Dern, visual effects that rival anything in 2001 and a powerful ecological message, Silent Running is a haunting and prescient sci-fi classic that resonates even more strongly today than it did at the time of its original release.

Four Stars (out of Four)... [Bruce] Dern is a very good, subtle actor.

A solid and well-disciplined first film. The spaceries really are impressive and the movie is an ingenious family entertainment which offers something to think about.

Just because Silent Running was a product of its time doesn't mean it doesn't have something to say to us these days, as well. The film offers a handsome production design, and Bruce Dern gives one of his most memorable performances as the wonderfully named Freeman Lowell. Technical merits are solid and the supplementary package very well done and enjoyable. Recommended.

Arrow Video certainly ups the ante here, giving us a presentation of Silent Running that’s been given careful attention. With a quality transfer and extras, it’s definitely the kind of treatment that a film of its calibre deserves. Highly recommended.

Trumbull’s sci-fi fable is both an exploration of environmental issues and the effects of isolation on human beings. Arrow Video presents Silent Running in a new 2K restoration that looks superb, a very definite step above Universal’s earlier Blu-ray release.

Douglas Trumbull's 1972 sci-fi film is a fascinating and seemingly incongruent mixture of tones and ideas. It's a space saga in which you can plainly see the origins of "Star Wars," "Alien," and "Moon" - and most directly, "Mystery Science Theater 3000," dealing as it does with a lone man on a space station who mostly communicates with a pair of robots. But it's also an environmentalist screed, a rare slab of hippie sci-fi, complete with Joan Baez needle drops and a Bruce Dern performance that goes from mild and sensitive to wildly unhinged. The effects remain stunning, even after all these years, and Arrow's new restoration gives them their deserved shine.