THE ADVENTURE OF A LIFETIME IS ABOUT TO BEGIN! 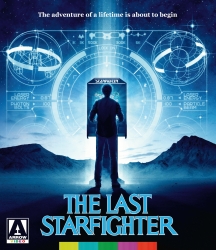 Greetings Starfighter! You have been recruited by Arrow Video to experience the 1984 sci-fi classic as you've never experienced it before! Directed by Nick Castle, the man behind the Michael Myers mask in the original Halloween, The Last Starfighter tells the story Alex Rogan (Lance Guest), an arcade game whizz-kid whose wildest dreams comes true when he finds himself enlisted to fight in an interstellar war. Now newly restored from a 4K scan of the original negative and featuring a 4.1 mix originally created for the film's 70mm release - never included on previous home video formats - The Last Starfighter arrives loaded with brand new and archival bonus features. Strap yourself in: the Blu-ray adventure of a lifetime is about to begin!

I frankly can't imagine any fan of this film not being over the moon (no pun intended) about the uptick in clarity and detail levels across the board in this presentation when compared to the pretty lackluster video on the old Universal Blu-ray. All in all, this is another fantastic upgrade of a cult item by Arrow which should certainly be appreciated by most fans. Highly recommended.

The Last Starfighter (1984) is one of those great, escapist adventure films that so many kids saw on video and have a soft spot for to this day. Thanks to Arrow Video's new Blu-ray edition and its squeaky-clean 4K restoration, we know that the movie holds up to our childhood memories. This is a great set for any Starfighter fan.

—Under The Radar Mag

Arrow Video's new Blu-ray of The Last Starfighter is a staggeringly excellent upgrade in every category. The film itself is like a warm blanket-perfectly cozy and a much-needed shot of good ole positivity. With a nearly perfect presentation and a wonderful assortment extras new and old, this is definitely the kind of upgrade that fans of the film will appreciate. Highly recommended!

The Last Starfighter remains one of the quintessential films that demonstrates practically everything audiences loved about films from the 1980's. This release looks and sounds fantastic... Highest recommendation possible.

The Blu-ray provides very good picture and audio along with a long roster of bonus materials.... I can't complain about this fine Blu-ray release.