Not Everyone Hates Ghosts... 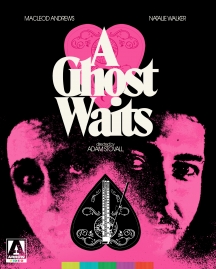 An ingeniously unique and unpredictable combo of horror, humour and heart, A Ghost Waits is a DIY labour of love years in the making from first-time writer/director Adam Stovall and producer/star MacLeod Andrews. Tasked with renovating a neglected rental home, handyman Jack (MacLeod Andrews, They Look Like People, Doctor Sleep) quickly finds out why the tenants keep leaving in droves - this house is haunted. The ghost in question is Muriel (Natalie Walker), herself employed from beyond the veil to keep the home vacant. Against the odds, Jack and Muriel find they have a lot in common... pulse notwithstanding. Having found a kindred spirit in an otherwise lonely existence, they must fight for their newfound affection as pressure mounts for them each to fulfil their "cross-purposes". From its opening spectral assault to its achingly poignant conclusion - as well as a witty depiction of afterlife bureaucracy in the vein of Beetlejuice and A Matter of Life and Death - A Ghost Waits has shocked and surprised audiences around the world, and now makes its home video debut stacked with insightful bonus features that take you inside the process of creating this phantasmagorical monochrome marvel

One of the strongest first features of recent years... A Ghost Waits joins the ranks of classic supernatural romances

A melancholy glimmer of hope that may just save us all

A horror movie with heart

You'll fall head over haunted heels for it

Heartfelt haunted house tale is one of the year's best surprises.

A Ghost Waits has a rather unique style, both presentationally and even in at least some of its content. It's provocative in its own way, and Stovall has certainly marshalled his forces well for what was evidently a micro-budgeted feature. Arrow continues to curate

Bringing together many genre's of film from Humor to Horror, from Drama to Romance, A GHOST WAITS has it all. If Kevin Smith would have made a movie set inside a haunted house instead of a convenience store, A GHOST WAITS would have been that film.