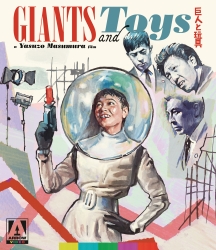 Giants and Toys is a sharp and snappy corporate satire that revolves around the ruthless machinations of a group of admen working in the confectionary industry. Its absurdist and acidly cynical take on the excesses of the media and advertising worlds presents a garish vision of a bold new postwar Japan where traditional company values come head-to-head with American-style consumer capitalism. As a new recruit to the marketing department of World Caramel, fresh-faced graduate Nishi (Hiroshi Kawaguchi) is eager to impress his ambitious and hard-nosed boss Goda (Black Test Car's Hideo Takamatsu), even if it strains his relationships with his college friend Yokoyama (Koichi Fujiyama) and new love interest Masami (Michiko Ono), who work at the rival companies of Giant and Apollo. With World's lead over its competitors slipping badly, the two spot a chance to get back in the race in the shape of the pretty but unsophisticated 18-year-old, Kyoko (Hitomi Nozoe). The two get to work polishing this rough diamond as their new campaign girl, but as the three rival confectionary companies pitch themselves into an all-out advertising war that spills out onto the streets of Tokyo as it escalates to ludicrous extremes, Kyoko's newfound fame starts going to her head. With the pressure mounting within the hothouse environment of World's boardroom, it soon becomes clear to Nishi that the Goda has sold out more than just his family in the name of corporate advancement. Making its worldwide Blu-ray debut, this lurid and colorful adaptation of the award-winning 1957 novel by Ken Kaiko is considered a landmark in Japanese film history and a key work by Yasuzô Masumura (Blind Beast, Red Angel), one of the country's most acclaimed directors of his generation.

Masamura's 'Scope compositions, pop art colors and space age props are the perfect window dressing for a social satire that feels not only prescient but prophetic.

Giants and Toys is a remarkably prescient piece of filmmaking which subtly but pretty acerbically documents aspects of Japanese culture that were already spinning out of control, even before the wide advent of television. The "comedy" here may be decidedly dark, but this is a film with a memorable aesthetic supporting a fascinating takedown of "fame and fortune". Technical merits are generally solid, and the supplementary package is outstanding. Recommended.