The masterpiece of the Japanese New Wave is a sensual study in surreal slaughter! 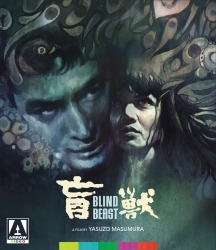 Blind Beast is a grotesque portrait of the bizarre relationship between a blind sculptor and his captive muse, adapted from a short story from Japan's foremost master of the macabre, Edogawa Rampo (Horrors of Malformed Men, The Black Lizard, Caterpillar). An artist's model, Aki (Mako Midori), is abducted, and awakens in a dark warehouse studio whose walls are decorated with outsized women's body parts - eyes, lips, legs and breasts - and dominated by two recumbent giant statues of male and female nudes. Her kidnapper introduces himself as Michio (Eiji Funakoshi), a blind sculptor whom she had witnessed previously at an exhibition in which she featured intently caressing a statue of her naked torso. Michio announces his intention of using her to sculpt the perfect female form. At first defiant, she eventually succumbs to his intense fixation on her body and finds herself drawn into his sightless world, in which touch is everything. Blind Beast is a masterpiece of erotic horror that explores the all-encompassing and overwhelming relationship between the artist and his art and the obsessive closed world that the artist inhabits, with maestro director Yasuzō Masumura (Giants and Toys, Irezumi) conjuring up a hallucinogenic dreamworld in which sensual and creative urges combine with a feverish intensity.

Blind Beast's reputation has continued to grow over the years as a much-discussed, yet little-seen, case study in extreme cinematic sex-charged cruelty

This is a fascinating if maybe "too weird for its own good" offering that shows Masumura delivering "the goods" with a minimal budget. As usual with Arrow's Blu-ray releases, the supplementary package is outstanding, for those who are considering making a purchase.

One of Japan’s most bizarre and disturbing movies, a gonzo body horror masterpiece of blood and sick desires.

For as long as I can remember I’ve ached to see (Blind Beast) and now it’s here in Blu-ray thanks to Arrow Video in a beautiful widescreen uncut version. This is one of those rare times that it lives up to its reputation- and then some.

The film is one that will hold your interest... actually quite beautiful in its own way