Three essential Giallo films gathered in the first of a multi-volume series restored from the original camera negatives. 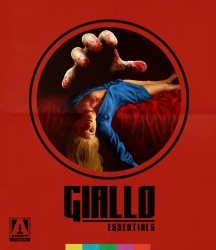 Alongside the spaghetti western, the giallo is one of the most famous Italian export genres: films steeped in mystery and intrigue, delivered with stylised violence and unforgettable musical themes. The Possessed (1965) masterfully combines noir, mystery and giallo tropes in a proto-giallo based on one of Italy's most notorious crimes. It tells the story of a depressed novelist (Peter Baldwin) in search of his old flame (Virna Lisi) who has disappeared under suspicious circumstances, prompting an investigation that finds him plunged into a disturbing drama of familial secrets, perversion, madness and murder. The Fifth Cord (1971) boasts a complex, Agatha Christie-esque plot of investigation into a series of brutal assaults. As the body count rises, whisky swilling journalist Andrea Bild (Franco Nero) finds himself under suspicion, making it all the more imperative he crack the case. The Pyjama Girl Case (1978), inspired by a real-life case that baffles to this day, takes us to Australia where former inspector Timpson comes out of retirement to crack the case of a young woman, found on the beach, shot in the head, burned to hide her identity and dressed in distinctive yellow pyjamas... In the first of a multi-volume series of Giallo Essentials these films feature a raft of talent in front and behind the camera with each film restored from the original camera negatives and presented with a range of contextualising interviews and featurettes.

It's so much more than the murderous mayhem that unfolds onscreen

It feels unique in the world of horror, outwardly rejecting acts of violence and making us consider our desire to see death and torture, forcing us to realise that these narratives can come from a place of truth.

[T]his highly polished mirror of uncertainty and obsession is a lovely discovery under any identity.