You will never forget it! 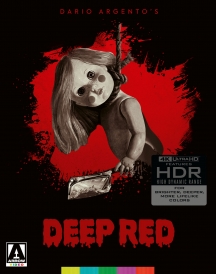 From Dario Argento, maestro of the macabre and the man behind some of the greatest excursions in Italian horror (Suspiria, The Bird with the Crystal Plumage), comes Deep Red - the ultimate giallo movie. One night, musician Marcus Daly (David Hemmings, Blow Up), looking up from the street below, witnesses the brutal axe murder of a woman in her apartment. Racing to the scene, Marcus just manages to miss the perpetrator... or does he? As he takes on the role of amateur sleuth, Marcus finds himself ensnared in a bizarre web of murder and mystery where nothing is what it seems... Aided by a throbbing score from regular Argento collaborators Goblin, Deep Red (aka Profondo Rosso and The Hatchet Murders) is a hallucinatory fever dream of a giallo punctuated by some of the most astonishing set-pieces the sub-genre has to offer.

One of Argento's very best works.

Gorgeous as it is gruesome

Operating under the principle that a moving camera is always better than a static one, and not above throwing in a terrifying evil doll, Deep Red showcases the technical bravado and loopy shock tactics that made Argento famous.

This exemplary giallo is clever enough to use its utterly compelling mystery to examine issues of gender identity and fluidity.

[A] stirring and uncompromising thriller.

This is another impressive 4K UHD release from Arrow, who have gone the extra mile by compiling new and rather lengthy supplements for this version. Highly recommended.

Arrow is helping to set the standard for how Dario Argento’s work should look on the Ultra HD format. As was the case with their previous Blu-ray release, the film looks and sounds amazing and the supplements offer plenty of extra value. Highly recommended!