He Came From The Swamp: The William Grefe Collection (Standard Edition)

Journey into wild world of director William Grefé with a collection from the darkest depths of the Florida everglades! 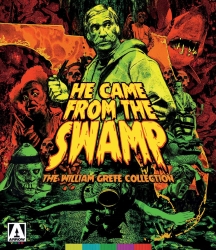 Killer sharks and human jellyfish and living mummies, oh my! Arrow Video is proud to present the first ever collection of works by William "Wild Bill" Grefé, the maverick filmmaker who braved the deep, dark depths of the Florida everglades to deliver some of the most outrageous exploitation fare ever to go-go dance its way across drive-in screens. Bringing together seven of Grefé's most outlandish films, plus a feature length documentary on the filmmaker's career, He Came from the Swamp: The William Grefé Collection packs in a macabre menagerie of demented jellyfish men (Sting of Death), zombified witch doctors (Death Curse of Tartu), homicidal hippies (The Hooked Generation) and seductive matrons (The Naked Zoo) - not to mention the ubiquitous go-go dancing - to create one of the most wildly entertaining box-sets of all time!

WILLIAM GREFÉ IS ONE OF THE FINEST INDEPENDENT DIRECTORS TODAY.

This is another set much like Arrow's tribute to Herschell Gordon Lewis where the films are not exactly undiscovered classics, but where their historical interest as well as some really enjoyable supplements make He Came From the Swamp Recommended.

Packed with dope fiends, killer crocs, and a whole lot of watusiing, HE CAME FROM THE SWAMP should scratch any grindhouse fan's itch for something wild, weird, and wonderful.

Covering everything from sharksploitation to hicksploitation to drugsploitation to horror, He Came from the Swamp offers an array of low budget films with enjoyable presentations and slew of great extras. For fans of William Grefe and his work, this is an essential purchase.

Enjoyable retrospective multi-disc anthology of the independent filmmaker who turned out low-budget exploitation fare for the drive-in market – which viewers might recall from snow-riddled UHF broadcasts when they were kids.