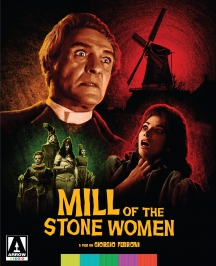 Before Black Sabbath, before I Vampiri, director Giorgio Ferroni (The Lion of Thebes, Blood for a Silver Dollar) introduced audiences to period horror Italian-style with his chilling 1960 shocker Mill of the Stone Women - a classic tale of terror redolent with the atmosphere of vintage Hammer Horror. Young art student Hans von Arnam (Pierre Brice, Night of the Damned) arrives by barge at an old mill to write a monograph about its celebrated sculptures of women in the throes of death and torture, maintained and curated by the mill's owner, the hermetic Professor Wahl (Herbert Böhme, Secret of the Red Orchid). But when Hans encounters the professor's beautiful and mysterious daughter Elfi (Scilla Gabel, Modesty Blaise), his own fate becomes inexorably bound up with hers, and with the shocking secret that lies at the heart of the so-called Mill of the Stone Women. The first Italian horror film to be shot in color, Mill of the Stone Women prefigured a raft of other spaghetti nightmares, including the work of maestros Mario Bava and Dario Argento. Arrow Video is proud to present this brand-new restoration of one of the foundational titles of Italian horror.

An often unheralded cornerstone in the gothic horror revolution of the early '60s... a visually startling treat

A glorious, understated work of art

This neglected gem is a masterwork of gothic terror that deserves to be ranked among the highlights of a decade filled with macabre Italian delights.

A pretty substantial upgrade across the board from other home entertainment versions of this film. Technical merits are solid, and as usual Arrow has provided a really nice supply of bonus features, along with impressive packaging. Recommended.

It’s a period picture with fairy tale overtones, atrocious medical crimes and a sensual romance that leans heavily on squeamish Victorian taboos . . . yes, it’s irresistible. So is the lavish presentation, one of this disc label’s very best.

The Arrow two-disc, Blu-ray release includes four different versions of the film. As with all Arrow releases, this one offers tons of exciting extras, including audio commentary, visual essay and a newly edited featurette. This is the perfect opportunity to discover a marvelously macabre cinematic journey.

Mill of the Stone Women gets a definitive release from Arrow Video that comes with solid audio/video presentations, four versions of the film, and a wealth of insightful extra content, highly recommended.

Four different versions of the film on here - a really, really cool release.

The atmospheric “Mill Of The Stone Women” is worth a watch

Now for the 61st anniversary of its original release the great folks at Arrow Video have given this cult classic horror film a deluxe Blu-ray release, feature not one, not two not even three, but four cuts of this film. Fans of 60s horror films are going to love to add this 2 disc Blu-ray set to their collection.

I was thrilled to hear that Arrow was putting this out. This looks beautiful, this looks phenomenal - it's gorgeous. I was drooling watching this transfer

A remarkably effective thriller with a familiar premise, but executed quite well. An excellent and undervalued Italian Gothic, Mill of the Stone Women deserves far more praise than it currently receives. Another excellent release from Arrow Video… an essential purchase for fans of the genre

Every movie deserves this kind of treatment!

Arrow Video has likely delivered the definitive home video edition of the movie with a great HD transfer of not one, but four versions of the movie as well as a decent slate of special features looking into the creation and legacy of the movie. Highly recommended

The packaging from Arrow is spectacular. This is one of their large format releases with slipcover, poster, book, and reversible art. There are a ton of special features to sink your teeth into as well. Worth it for fans.

Another excellent release from Arrow Video, the Limited Edition double disc Blu-ray of Mill of the Stone Women is an essential purchase for fans of the genre. Highly recommended!

A solid entry which transcends the mundane to achieve something a bit special.

Mill of the Stone Women is a masterpiece of tone and atmosphere with enough ornate sets, eye-poppin’ color, and Gothic goings-on to have horror hounds droolin’ for days!

Arrow once again shows why they are one of the premiere companies when it comes to restorations and rediscovering lost classics. One can only sit and wait to see what comes next. This one is worth adding to your shelf before the limited editions are gone.

Mill Of The Stone Women has never received the same acclaim as some of its contemporaries, but it is just as worthy. The atmosphere is extremely creepy and the story is well paced as it builds up to a thrilling finale. This is a great purchase.

You need to check out this stunning release.