The tenant in room 7 is very small, very twisted, and very mad. 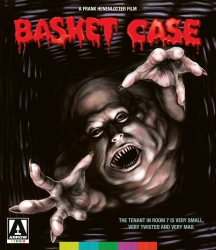 The feature debut of director Frank Henenlotter (Brain Damage, Frankenhooker), 1982's Basket Case is perhaps his most revered - a riotous and blood-spattered midnight movie experience, now immortalized in a lavish new 4K restoration by the Museum of Modern Art (MoMA). Duane Bradley is a pretty ordinary guy. His formerly conjoined twin Belial, on the other hand, is a deformed, fleshy lump whom he carries around in a wicker basket. Arriving in the Big Apple and taking up a room at the seedy Hotel Broslin, the pair set about hunting down and butchering the surgeons responsible for their separation. But tensions flare up when Duane starts spending time with a pretty blonde secretary, and Belial's homicidal tendencies reach bloody new extremes. Filmed on a shoestring budget against the backdrop of 1980s New York (where the movie would become a staple of the infamous 42nd Street grindhouse circuit), Basket Case has clawed its way from its humble origins to become one of the most celebrated cult movies of all time.

A fantastic 4K restoration and an over-sized basket-worth of extras.

Basket Case looks fantastic now and with the bounty of extras in tow, it's easily one of their most satisfying discs of the year. Highly recommended to anyone who's still curious about what's in the basket.

Arrow Video once again knocks it out of the park when it comes to their releases of important cult films, with a stellar A/V presentation and an overabundance of extras. The film in question is far from a masterpiece, and it has no desire to be one, but f

Basket Case might be a dingy and gruesome slice of subterranean cinema but this excellent release from Arrow, touting the stunning 4K restoration by MoMA and packed with hours of awesome bonus features, is the kind of treatment Criterion usually provides.

The Arrow release is phenomenal like always. The list of special features on this one is massive. If you haven’t seen Basket Case, you owe it to yourself. It’s not like anything you’ve seen, and yet also familiar. Give it a look.