A Walk In Her Shoes

An homage to the life and legacy of Harriet Tubman that shares one woman's present-day story of empowerment and triumph. 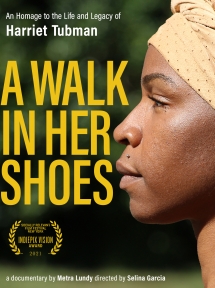 A WALK IN HER SHOES is a documentary feature that shares one woman's intimate story of personal awakening, discovery, empowerment, and triumph.

In a quest to overcome one of the biggest obstacles of her life, personal trainer and author Metra Lundy simulates a walk to freedom by re-tracing the steps of the great American heroine, Harriet Tubman, from Maryland to Canada. In doing so, Metra discovers who she really is, answering a call to live life on purpose.

The film documents the 695 mile route that Tubman took in the 1800s, as the filmmakers traverse their own emotional journeys and Metra covers 245 miles on foot, as Tubman did numerous times, freeing herself and countless others from enslavement. Along the way, the filmmakers interview Underground Railroad historians, social workers, and community leaders, bringing the scope of Harriet Tubman's epic journeys into a poignant and unprecedented present-day context.

'This is a must-watch. Highly Recommended.'

This is a must-watch. Highly Recommended