An oddball zombie comedy told from the perspective of the brain munching monsters themselves. 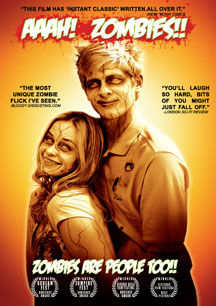 Zombies. You know 'em, you love 'em. But what do they think of you' In this hilarious twist on the Classic Zombie Tale, we see the world through Zombie eyes when a barrel full of Toxic Goo transforms four friends in to the Walking Dead, and suddenly, it seems every one else has gone mad. In the most unique Zombie story in years, the Zombies embark on a bumbling quest to find the "Truth", completely unaware of their rotting undeadness. After all, Zombies are people too.

...Charming...embrace by horror fans a sure thing. Deadpan fun with performances right on pitch.

This film has 'instant classic' written all over it. It's refreshing to see an Indie film that really takes a shot at something different for a change. ...you can't stop laughing.

...you'll laugh so hard bits of you might just fall off.

A surprisingly epic story about outcasts finding their place in a world that despises them. Highly, highly recommended.

...a splatter of hope for the genre... 'Aaah! Zombies!!' is a step towards a smarter dead.

In a time when even the stand-out new zombie movies are treading on familiar ground, both stylistically and thematically, it's rare to find an entry in the genre that demonstrates both originality and wit. 'AAAH! ZOMBIES!!' does just that.