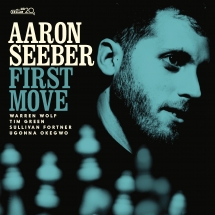 Although you may be less familiar with Aaron Seeber than with the other artists on this live recording, you will immediately recognize the tradition of jazz drumming in his steady and sure cymbal beat.

A native of Washington D.C. whose visibility on the New York jazz scene continues to rise, Seeber is both studied in the recorded legacy of his instrument and equipped with over a decade of on-the-bandstand experience.

Among his influences are the greats we evoke on a first-name basis--Roy, Max, Billy, to name a few...

At first glance, Seeber's quintet may look like an all-star assembly, but each of these established artists has a history with the young drummer. As a teenager, Seeber went to see saxophonist Tim Green throughout the D.C. metro area, and by the early 2010s Green started hiring him for gigs.

Many of Seeber's first major performances were with Green, including weekends at the legendary Bohemian Caverns club where Miles Davis, Billie Holiday, and many others appeared. It was here that Seeber first played with and met vibraphonist Warren Wolf, a native of Baltimore. Beyond the musical and professional experience, Seeber credits Wolf for his first opportunity to travel and perform abroad during a tour of Europe in 2015.

Pianist Sullivan Fortner may be most widely known from his work with star vocalist Cécile McLorin Salvant, but musicians on the scene recognize him as an agile and unpredictable improviser who raises the stakes in any musical setting. Seeber first worked with him at New York City's Fat Cat and he has been calling Fortner for gigs ever since. Bassist Ugonna Ukegwo and Seeber began playing several years ago and are frequently heard together in pianist Pete Malinverni's trio.

As a collective, this is a world class group that has laid on a set of recordings for Aaron's Cellar debut that is diverse, swinging, and always inventive and electrifying.

Such beauty might sound easy, but it isn't easy to create.