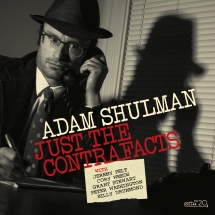 From the liner notes, written by the leader:

Just The Contrafacts was a project borne of the 2020 lockdown. I was stuck at home and unable to play with other human beings. As the months dragged on, I needed some kind of musical outlet. I started giving myself the exercise of writing contrafacts; that is writing new melodies over the chord structure of standard tunes from the Great American Songbook. It was something to keep my mind occupied and my creativity active in the absence of gigs. After writing a fair number of melodies, I thought it would be fun to write sextet arrangements and as I started doing this, I thought "why not make this into an album?"

Being a mental escape of sorts from the tedium and anxiety of the early lockdown period, I gravitated towards humor and whimsy in these pieces. The world for me was heavy enough and I was using music as a way to sooth myself by playing around and having fun. A lot of the titles of the tunes reflect this attitude. The title and cover also point to escapism to a different time and a tongue-in-cheek nod to film-noir. I hope, dear listener, that some of this fun and light-hearted-ness comes through and can serve as a balm for your soul in these strange times

Although the album was recorded for Cellar Live, it would have been right at home on Prestige or Blue Note, the sovereign labels during the bop regency of the 1950s and '60s. On the one hand, Shulman's radiant charts, underlined by delightful harmonies and rhythmic patterns, emulate that glorious era while on the other proving decisively that superior music is indeed timeless.

Do you miss the sounds of vintage Blue Note albums by the likes of The Jazz Messengers? Fear not-pianist Adam Shulman sounds like a hard bop oasis.

...a fresh-sounding, soulful endeavor...(Shulman's) approach to playing and composing has the potential to reach a wide-ranging audience while remaining mindful of artistic integrity.