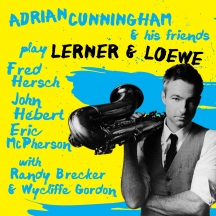 This album, a reinvention of a set of glorious songs in some cases almost 75 years after they were first played, is in fact a candy store. Mainly, it is proof that a great composer and great musicians will always find a new way.

The leader clearly had a famous precedent in mind when he recorded his new album, Adrian Cunningham & His Friends Play Lerner & Loewe. Cunningham, an Australian reedist now based in New York, has crafted a gem in the spirit of 1956's Shelly Manne & His Friends' Modern Jazz Performances Of Songs From 'My Fair Lady.' For that vintage, influential recording, the lineup was a trio: Manne (drums), André Previn (piano) and Leroy Vinnegar (bass). But Cunningham pursues a broader sonic palette here: He recruited Fred Hersch's acclaimed, namesake trio--featuring bassist John Hébert and drummer Eric McPherson--to join him in the core unit, and he invited trumpeter Randy Brecker and trombonist Wycliffe Gordon to play on a few tracks.

Whereas Manne focused on a single musical by the powerhouse duo of lyricist Alan Jay Lerner (1918-'86) and composer Frederick Loewe (1901-'88), Cunningham dives into showtunes not only from My Fair Lady ('Just You Wait,' 'The Rain In Spain' and 'I Could Have Danced All Night'), but also from Gigi, Camelot, Brigadoon and Paint Your Wagon. Along with this Cunningham album, Arbors Records simultaneously released another, related disc: a duo project by Dick Hyman (piano) and Ken Peplowski (clarinet, tenor saxophone) titled Counterpoint Lerner & Loewe.

The program on Cunningham's work--a mixture of written charts and improvisation--showcases the bandleader's skills on saxophone, clarinet and flute. This straightahead jazz gem also reveals the adventurous streak of a bandleader who seeks to bend, dissect and reconstruct showtunes in a new way, with fresh ideas and unexpected tempos. When Gordon unleashes some grease and growl on 'I Could Have Danced All Night' and 'I Was Born Under A Wand'rin' Star,' the band transports the material from the Broadway stage to a smoky jazz club.

Fans of Hersch's trio albums likely won't be disappointed with this sparkling, nuanced program. The intertwining of Hersch's poignant piano lines and Cunningham's tender clarinet work on the ballad 'The Heather On The Hill' epitomizes sophistication and grace.

It's been over 60 years since Shelley Manne and his pals made the biggest selling jazz record of the times with a L&L program. Professor Cunningham rounds up some of his best teacher's pets to do it again. While the underlying shows much of this music com