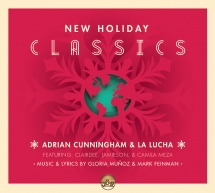 Get ready to deck your halls and your speakers with your new favorite holiday album. Adrian Cunningham & La Lucha present New Holiday Classics. Songwriting team Gloria Muñoz & Mark Feinman composed music and lyrics that range in style from jazz to pop, to a danceable vallenato, and to upbeat R&B.

Muñoz writes in the liner notes, "We listen to the same holiday songs year after year after year. But this year is different because we are different." New Holiday Classics presents fresh new songs to help listeners celebrate this holiday season all year long. While it's not a typical holiday album, it's sure to become a favorite and instant classic.

Backed by the trio La Lucha of chart-topping Everybody Wants To Rule The World, the album features guest singers Camila Meza, Clairdee, and Jamieson. Cunningham sings on six songs, including the two straight-ahead jazz tracks; the warm weathered "Florida Holiday" and Grinch-like swinger, "It's So Good To Be Bad." In addition, he triples on tenor saxophone, clarinet, & flute throughout the album, including the funny baroque-pop infused "Dapper Winter's Best."

Soulful singer Jamieson is the album's first guest on "Starlight," a power ballad focused on how to approach the holidays after loss, which also welcomes a string quartet. Jamieson also turns up the funk on "No Time of Year Like Christmas."

"Nochebuena" features Chilean singer and guitarist Camila Meza, along with a full cast, on this Vallenato Cha-cha. San Francisco based vocalist Clairdee is backed by strings on the hope-filled ballad "New Year's Day," arranged by NEA Jazz Master, Dick Hyman. Adrian & La Lucha closes out the album with "Snowfall," a timely song about change.

Composers Muñoz & Feinman said about the album, ''With New Holiday Classics, we set out to write and record all new original holiday music for people making an effort to reconnect with their joy this holiday season. It won't be easy, but we know that music always helps.''

Anyone that's been along for the ride this far with Professor Cunningham probably knew all along that when he finally added a holiday record to his resume, it wouldn't have any Mel Torme on it. Adding Latin jazz and soul R&B vocals to this set of all original compositions, it feels like he beat Mark Winkler to the punch. Easy going stuff that was made for enjoying at a water front bar, who knew sunshine was the missing ingredient for the perfect holiday? Right in the pocket while being something different, it works well throughout.