Adrian Cunningham - Professor Cunningham And His Old School: Swing It Out!

This album is a fabulous example of highly dance-able and strikingly beautiful Swing jazz. 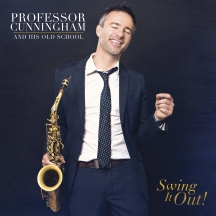 In the mid 70s, the Chiaroscuro label took a bunch of used up jazzbos and let them play turning out a series of really sweet albums in the process. The vibe here the good professor takes on is right in that pocket but he's anything but a used up cat as his vitality keeps growing with each new set under each new guise. The label owner told me to keep my eyes and ears open for this set and she more than knew from whence she spoke. Old school without being moldy and musty, most of the songs might be older than your grand pa but they are as modern and smoking as anything you could imagine. Another high watermark set from this young old pro, this set is hard to ignore and hard not to like. Killer stuff.