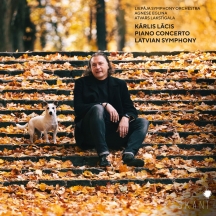 World premiere recordings of Karlis Lacis' Piano Concerto and Latvian Symphony (Latvju simfonija) by Liepaja Symphony Orchestra and pianist Agnese Eglina, recorded at Great Amber Concert Hall in Liepaja, Latvia (August 2021), Atvars Lakstigala conducting. Karlis Lacis is an artist with an impressive creative range, from classical and choral music to instrumental experiments, music for theatre performances, jazz and pop music. His work includes symphonies, music for popular and award-winning theatre performances, collaborations with some of the greatest Latvian musicians, Latvian Song Festivals and chamber music concerts. Lacis is known not only as a composer but also as a pianist and producer. He is a sought-after arranger of music who tirelessly explores new possibilities in arranging and instrumentation. Lacis's pop music projects have won international acclaim, filling auditoriums not only in Latvia but also abroad. He is commended by critics for his versatility and professionalism, praised by colleagues for his fanatically serious attitude to and capacity for work, and sought after by audiences for his distinctive style and mood. "My work is an entire entity. It comes gradually - with years, with experience, when one can live up to the expectations one puts on oneself. I am grateful to be able to enjoy it, and I know that my 'debt' to an audience for its trust is the music itself," Lacis has commented in an interview.