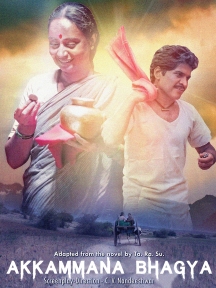 Akkammana Bhagya (Akkamma's Fate) is all about the ill-fated village women Akkamma's struggle towards her family welfare and empowerment in pre-independence era of India. "Akkammana Bhagya", is a film based on Kannada's novel of the same title written by the renowned novelist of yesteryears, Ta.Ra.Su (T. R. Subba Rao). The film narrates the saga of a poor widow set in the backdrop of rural India from the pre-independence era. An era that witnessed India's struggle for freedom from the British running parallel to women's struggle to gain freedom from the social, cultural, and gender-based inequality and oppression.