Alcatrazz - The Best Of Alcatrazz: Live In The USA

"Alcatrazz" the rock band formed by vocalist Graham Bonnet (of Rainbow fame) in Los Angeles, back in the early '80s. 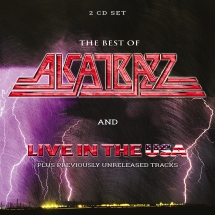 "Alcatrazz" the rock band formed by vocalist Graham Bonnet (of Rainbow fame) in Los Angeles, back in the early '80s. "This Best Of" gathers tunes from four albums (one of them live). Originally released in 1988 This "Best Of" gathers this band's two singles, besides salient tunes from their four albums (one of them live), particularly interesting "Island in the Sun", "General Hospital" and the fantastic "Hiroshima mon amour", which was a sort of hit back in the early 80s. "Live In The USA" is what it says on the tin, Plus Previously Unreleased Tracks. This will be a treasure item to please maniacs. It is really amazing how exciting about 65 minutes is. Fans should not miss this superb title!