If You Survive The Night... Nothing Will Scare You AGAIN 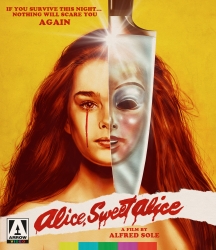 A young Brooke Shields meets an untimely end in this religious-themed proto slasher par excellence from director Alfred Sole. On the day of her first communion, young Karen (Brooke Shields) is savagely murdered by an unknown assailant in a yellow rain mac and creepy translucent mask. But the nightmare is far from over - as the knife-wielding maniac strikes again and again, Karen's bereaved parents are forced to confront the possibility that Karen's wayward sister Alice might be the one behind the mask. Bearing influences from the likes of Hitchcock, the then-booming Italian giallo film and more specifically, Nicolas Roeg's Don't Look Now, Alice, Sweet Alice is an absolutely essential - if often overlooked - entry in the canon of 1970s American horror.

Arrow has once again stepped up to the plate and provided fans of a cult film with a release that touts noticeably better video, along with excellent audio and a nice array of supplemental material. Recommended.

With this beautiful restoration, Arrow Video has made a commendable effort to ensuring that Alice, Sweet Alice finds its rightful place in the horror film canon.

Alice, Sweet Alice is a fast-paced, visceral, and engaging film that provides plenty of twists, turns, and ambiguity.

Spiritually, Alice, Sweet Alice feels like an Americanized Giallo. But while it certainly pulls from differing horror elements and social themes, they all combine into something richly textured, distinct, and thoroughly disconcerting. Arrow Video have put together a superb release for a film that deserves your attention.