An out-of-work actor stumbles upon key to the universe and is drawn into intergalactic war between clowns and aliens. 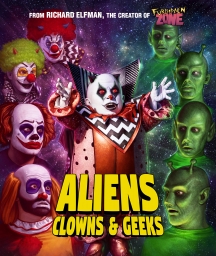 Out-of-work actor Eddy Pine stumbles upon the key to the universe and is drawn into an intergalactic conflict between killer clowns and sneaky green aliens--the fate of the planet hangs on the outcome. And thus begins a "wild, wacky comedy" (Horror Buzz) filled with hilarious twists and turns in this "fantastical sci-fi adventure!" (Bloody Disgusting)

This is one of those films that can't be compared to anything else-a uniquely bizarre experience with the ability to enrage, enthrall, but mostly entertain.

Sci-Fi comedy aims low and scores high... a silly, goofy, stupidly intelligent, and absolutely what a mad scientist would order!

Aliens, Clowns and Geeks is John Waters with a pinch of The Three Stooges and a dash of Monty Python packaged as a fantastical sci-fi adventure.

This is another totally gonzo Elfman effort...

Aliens, Clowns & Geeks is a wacky ‘n’ deranged pulp sci-fi fantasy comic made into a live-action-comedy film. If you have a taste for the wackier side of sci-fi B-movies, which is liberally dabbed with touches of humour, the surreal, and the bizarre… then Aliens, Clowns & Geeks will most certainly be your thing. And let us hope the director/ writer Elfman gets free reign again - because this is really an amusing/ crazed romp of a film.

“Forbidden Zone” director Richard Elfman returns with another outrageous saga, all about the intergalactic conflict between clowns and aliens.

Aliens, Clowns & Geeks provides everything the title promises, and then some; it’s a fever-dream kaleidoscope of debauchery, nonsense, and cinematic lunacy and shouldn’t be missed by you adventurous lovers of the absolutely absurd!

This satire, which features music by Danny Elfman and Ego Plum, received a 100 percent fresh rating at Rotten Tomatoes. Critics lauded the film’s outrageousness and absurdity.

Despite its ten layers of sheer lunacy, Aliens, Clowns & Geeks has a central story and structure that delivers the comic goods in perhaps the most absurd, most childish (in a good manner), and most surreal way possible.