Daring and personal, Alyssa Allgood's What Tomorrow Brings is the vocalist's most sophisticated declaration yet. 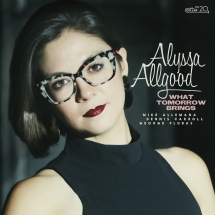 On her 3rd studio album, Chicago vocalist Alyssa Allgood wields her instrument with depth, nuance & sophistication. Through refined interpretations of classics and the debut of four stunning originals, What Tomorrow Brings invites listeners on a personal journey of despair, determination and discovery.

While Allgood is in her twenties, she sings with a depth beyond her years, particularly on her covers of Abbey Lincoln's "Should've Been" and DinahWashington's signature "This Bitter Earth."

The album starts with a breezy "There Are SuchThings," a tune iden tifiedwith Frank Sinatra that showcases Allemana's economy of style and Allgood's mastery of scat. The mood swings with Carroll's "Enclosure," a love song from an introvert's point of view, while "Memories," one of two Allgood-Carroll collaborations, presents the singer as a cynical woman whose memories "are out of touch and so are you."

An Allemana-Allgood duet on "For All We Know" paves the way for "Passing Glance," a supple Carroll-Allgood effort with Allemana at his densest, Allgood assured and daring

...She is undeniably skillful at what she does. The expressive Chicagoan wears different hats, from scat singer to interpreter of familiar lyrics, to lyricist--and she shines in all of those areas on this outing.'

A fullness of expression found in so few vocalists cut from current cloth...she is quintessential in every regard. She treats the art of wordless singing as it should be--which is to say, as an instrument in its own right.' 5 star review

...this is a real jazz vocal set that capably mixes the old and new and is bottomed by vocals that really cover the jazz waterfront. Hot stuff for hot times.