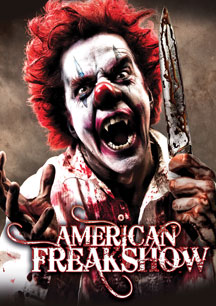 American Freakshow takes the term Freakshow and turns it on its head with Zombies, Ghosts, Vampires as well as modifieds, clowns and spirits from beyond in this amazing collection of the mysterious and bizarre which includes many macabre oddities and abominations. Includes the films: The Unholy Sideshow, Jelly Boy the Clown and the bonus feature Pennyland Amusement Park.

A Spectacle like a Sledge Hammer to the Face

A Freakshow adventure like no other, even P.T. Barnum would be blown away