From the director of Animal House... A Different Kind of Animal. 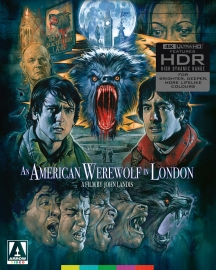 One of the greatest directors of the 1980s, John Landis (The Blues Brothers, Trading Places), expertly combines macabre horror with dark humor in the lycanthropic classic, An American Werewolf in London. American tourists David (David Naughton) and Jack (Griffin Dunne) are savaged by an unidentified vicious animal whilst hiking on the Yorkshire Moors. David awakes in a London hospital to find his friend dead and his life in disarray. Retiring to the home of a beautiful nurse (Jenny Agutter, Walkabout) to recuperate, he soon experiences disturbing changes to his mind and body, undergoing a full-moon transformation that will unleash terror on the streets of the capital... An American Werewolf in London had audiences howling with laughter and recoiling in terror upon its cinema release. Landis' film has gone on to become one of the most important horror films of its decade, rightly lauded for its masterful set-pieces, uniquely unsettling atmosphere and Rick Baker's truly ground-breaking, Oscar-winning special makeup effects. Now newly restored and presented with an abundance of extra features, this big beast of horror can be devoured as never before...

The movie has sequences that are spellbinding

A horror film that packs a wallop

Not just gory but actually frightening, not just funny but clever

Full moons, gruesome kills, howling; American Werewolf in London brings those pieces of Universal Monsters lore along. But David's story is one of terror, PTSD that gives him ludicrous dreams of Nazi wolves invading his home, and conversations with his decomposing dead friend

When it comes to modern horror comedies, An American Werewolf in London really ranks very high up the charts, basically because it delivers on all levels. A deserving classic for sure, and a must-see for any self-respecting horror fan!

One of the greatest directors of the 1980s, John Landis, expertly combines macabre horror with dark humor in the lycanthropic classic, An American Werewolf in London

Landis' film has gone on to become one of the most important horror films of its decade, rightly lauded for its masterful set-pieces, uniquely unsettling atmosphere and Rick Baker's truly ground-breaking, Oscar-winning special make-up effects. Now newly restored and presented with an abundance of extra features, this big beast of horror can be devoured as never before

The film looks and sounds stunning in 4K top say the least. Arrow Video continually amazes with their restorations.

Landis does an incredible job of presenting not just a horror film, filled with the customary werewolf tropes, but also a love story, that of David and Jack, and David and Alex, with all aspects of the story feeling genuinely authentic, and never once feeling contrived.

The Limited Edition Blu-ray release from Arrow Video was the final word on the film on Blu-ray. But between the Blu-ray and now this new 4K UHD, there's no going back. These are the definitive presentations of the film going forward, this one offering additional depth and color balance.

Featuring a gnarly and bone-shattering transformation scene, An American Werewolf in London set the gold standard

This film absolutely blew me away the first time I saw it and has remained a favorite of mine over the years. I love this movie and it is obvious that Arrow Video loves this movie too.

a resolution to rival what I saw on the big screen.

horror cinema's most celebrated films are the ones that think outside the box. A case in point is An American Werewolf in London, a film that remains as fresh today as the day it was first unleashed on audiences.

The smash hit monster-gore popcorn flick comes to 4K Ultra HD: David Naughton and Griffin Dunne's descent into a lycanthropic nightmare is as wrenching as ever.

An American Werewolf in London is actually a rather sweet love letter to Universal's heritage with the Wolfman, but it manages to update the basic storyline with some post-modern irony and healthy doses of both humor and gore.

When it hit screens in 1981, An American Werewolf In London caused a sensation due to its groundbreaking visual effects. Even after 41 years, the movie holds up pretty well.

An American Werewolf in London is very nearly a perfect movie; even its flaws are charming. After a number of appearances on Blu-ray, Arrow Video upgrades its own version with a 4K Ultra HD restoration. The colors are more vibrant with the addition of HDR and there's none of the noise reduction.

Simply an impeccable presentation of a one-of-a-kind classic.

This is an all-time classic. Until Arrow got a hold of it, I don't think it got proper justice on home video

A ton of special featues... looks better than any other version that has ever existed

John Landis' 1981 masterpiece remains an absolute masterclass in executing a horror/comedy with equal attention towards both genres. The film is very funny throughout with some highly quotable lines and unforgettable gags, and the horror beats deliver gore, scares, and some terrifically dark moments.

If aesthetics and physical bells & whistles are your thing, it's hard to top this brand new 4K limited edition of An American Werewolf in London.

I had thought that the BD was the closest thing to a definitive home video release of An American Werewolf in London, but now we have an entirely uncompressed and HDR-enhanced version of that already beautiful transfer.

One of the greatest directors of the 1980s, John Landis (The Blues Brothers, Trading Places), expertly combines macabre horror with dark humour in the lycanthropic classic, An American Werewolf in London.

In my top 50 movies of all time and definitely in my top 10 Horror films. I absolutely love this movie.

One of the most beloved classic horror films slips its way into a new special edition 4K UHD from Arrow Video. Although this is not the first time An American Werewolf in London has graced the format, Arrow's special edition release is nothing short of spectacular.

I am a huge fan of these Arrow 4K special editions

One of those rare horror-comedy hybrid films that actually works really, really well, John Landis' An American Werewolf In London remains a textbook example of just how well 'funny' can mix with 'scary' effectively when given a smart script, a talented director and a strong cast.

Altogether this is one of Arrow's most impressive recent releases.

There is so much to love in An American Werewolf in London. This is a must-own for anyone who loves this film as much as I do.

An American Werewolf in London gets a 4K UHD upgrade from Arrow Video. The results... stunning.

[An American Werewolf in London] debuts on 4K UHD this month from Arrow boasting a new, Dolby Vision HDR graded 4K transfer working off color grading Landis himself approved in a 2018 HD master. Landis' revisionist genre exercise remains a blast of enthusiastic, then risk-taking filmmaking. Though often imitated, Landis' mix of horror and comedy was groundbreaking at the time of its release, as was its outstanding, Oscar-winning Rick Baker make-up effects.

The clarity of the Arrow reissue is stunning

It all looks absolutely wonderful, and this is probably one of the best looking 4K presentations I've seen on the format so far.

The opening here is among one of the most impressive

Now in stunning 4K Ultra HD with a beautiful Dolby Vision transfer, great audio, and an impressive assortment of bonus features... a great one to add to the collection

I've owned this film on every affordable format, and this one is fantastic beyond words. So worth the price and crafted with a genuine love for the film the way Arrow always does.

An American Werewolf in London has seen a lot of releases over the years on DVD and Blu-ray, but longtime fans of the film will certainly want to get their hands on Arrow Video's new special edition, which boasts a brand new 4K restoration from the original 35mm camera negative.

Arrow are experts at putting together an ultimate edition

This is the version you need to own

For long-time fans and newcomers, the release is a worthy addition to a physical media collection

Robert Paynter’s cinematography in An American Werewolf in London is swathed in smoke and dreadfully atmospheric, providing a visual palette steeped in classic horror roots.