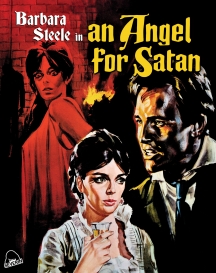 Severin's new Blu-ray of "An Angel for Satan" may be the first-ever authorized U.S. release of the film, and they've rightfully given it the edition it deserves. Whether you're a fan of Barbara Steele or Italian horror in general, you'll find that there's much to enjoy here.

An Angel For Satan (1966) was the last of the Italian Gothics starring icy Goth queen Barbara Steele (Nightmare Castle); handsomely directed by Camillo Mastrocinque (Crypt of the Vampire) who up a fever-dream of supernatural seduction and Gothic period atmosphere.