Andrea Superstein - What Goes On 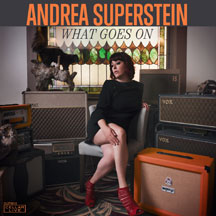 Produced in Toronto by Jill Barber co-conspirator Les Cooper and released on Vancouver's esteemed Cellar Live imprint, the sophomore album from Vancouver-based indie artist Andrea Superstein is a quirky, arty, pop-jazz tour-de-force. The ambitious production draws on Andrea's background in theatre, her training as a jazz vocalist, and her love of 90s trip hop acts like Portishead and Morcheeba - and it pulls them all together into a wonderfully playful and cohesive musical package. The diverse repertoire on What Goes On includes a super sexy version of Bananarama's "Venus," a heavily Portissed-up rendition of Radiohead's "Karma Police," a sultry original about Andrea's awkward first date with her now-husband "Just One Time" - featuring a chorus sung by the Juno-winning Good Lovelies - and a wistful rendition of "I Love Paris," marked by gauzy accordion and moody bass. The cherry red-haired chanteuse also turns in a mischievous cover of "I Want to Be Evil," punctuated with Hammond B3; a nostalgic original called "My Baby Loves Me," which is inspired by early jazz; and a groovy version of Jean Leloup's "I Lost My Baby" that sees the Montreal-born-and-raised Andrea singing in French.