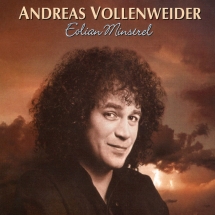 Almost two years ago, MiG - music started re-releasing Andreas Vollenweider's entire back catalog, with Andreas handling the editing and re-mastering of his life's work himself.

"Eolian Minstrel" was already something special when it was released back in 1993. It was Vollenweider's first vocal album: The "classic" Vollenweider-sound combined with the voices and lyrics of the American singer/songwriters Eliza Gilkyson and Carly Simon.

Andreas Vollenweider himself still feels the addition of the element "singing" as an adventure. What may have irritated some of his fans at that time seems more up-to-date than ever before, as Enya, Moya Brennan and Loreena McKennit prove.

What makes "Eolian Minstrel" a special work of Vollenweider are also the excellent instrumentalists, who with great virtuosity and diversity made the album grow into a true cornucopia of sound.