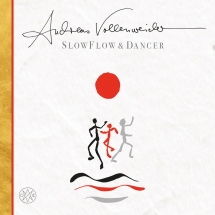 After "Quiet Places" (2020) Andreas Vollenweider has grouped his music on his new album according to atmosphere and character: "Slow Flow" is a collection of pieces with a relaxed, flowing feel, while "Dancer" is full of movement and rhythm.

All 11 songs on "Slow Flow" and "Dancer" were created between 2010 and 2021 in collaboration with British producer Andy Wright (Eurythmics, Simply Red, Jeff Beck, Simple Minds, among many others). The two were supported in their creative process by Vollenweider's talented circle of friends, who laid the foundation for the songs: Walter Keiser (drums), Andi Pupato (percussion), Daniel Kueffer (bass clarinet), Oliver Keller (guitars) and the young Swiss rapper and beat boxer Steff La Cheffe, a.k.a. Stefanie Peter.

The London Session Orchestra, consisting of musicians from the Royal Symphonic Orchestra under the direction of James McWilliam, filled out the sound. Renowned British producer and arranger Peter Vettese is responsible for most of the orchestration.

The recordings took place at Andreas' Lakeside Studios in Switzerland, as well as at SABC Studios in Johannesburg, South Africa, and finally at the legendary Abbey Road Studios in London. Andy Wright's long-time sound engineer Gavin Goldberg has set new sonic standards for Vollenweider's music with his work, and is able to delight even the most discerning audiophiles with a punchy yet transparent, dynamic soundscape.