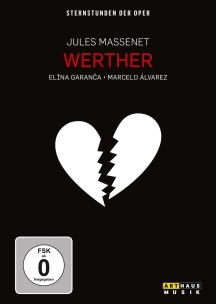 Arthaus presents the Vienna State Opera’s outstandingly cast new production of Werther on DVD. The production was the Vienna State Opera debut for the young Swiss conductor Philippe Jordan – the Argentinian tenor Marcelo Álvarez, took the title role. Although he had already secured an international reputation through his performances in leading opera houses all over the world, this was his first appearance in the premiere of a production in Vienna. His Charlotte, on this occasion the young Latvian mezzo-soprano Elīna Garanča, joined the Vienna State Opera in 2003. Her performances have been enthusiastically received and she has already been labelled as the new mezzo wonder alongside Vesselina Kasarova and Magdalena Kožená. Staged by internationally sought-after Rumanian director, Andrei Serban, the apparently sentimental love story – normally presented in 18th century period costumes - reveals a study of personal relationships and a close observation of a woman, who comes of age too late. Serban’s aim was to rid the opera of the unjustified reputation of banality that clings to it despite its underlying tragic mood. By setting the production in the stiff, claustrophobic atmosphere of a small town in the 1950s, he aimed to make the audience more aware of its deeper levels of self-denial.