EM Records is delighted to present a recording of new works by contemporary composer Paul Carr. 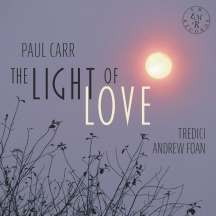 New by contemporary composer Paul Carr, whose lyrical and intensely touching works never fail to move and delight. This disc contains the world premiere recording of The Light of Love, alongside his setting of Psalm 23.

Paul writes ''It's always a pleasure being commissioned to write a particular work for a specific occasion and especially for a recording, but not so easy during a pandemic when the world was thrown into disarray and life as we know it put on hold; a Mass for the Dead would not have been my first choice during such a troubling time. But in fact, I embraced it and it proved a welcome distraction during the months of isolation and kept me creatively engaged during the first lockdown. The commissioners, Ken and Stella Palmer, love the Mozart Requiem and have both sung it many times, so my remit was to use the Mozart as a guide and to set texts in English as well as Latin (for which I commissioned librettist Euan Tait), and to score it for a chamber choir with just four instruments: soprano sax, cello, harp and organ, a rather lovely combination as it turns out - so while it lasts just under an hour and has some powerful and dramatic moments, it's essentially a chamber work embracing moments of gentle intimacy. As with any new work the real awakening comes from hearing it performed, and this came in September when lockdown restrictions had been eased and we were able to record in the magnificent acoustic of Christchurch Priory in Dorset; just thirteen singers, many of whom are still studying at music colleges across the country, plus four outstanding instrumentalists - the emotional joy of making music with others again after months of isolation was evident. We recorded over three evenings with rehearsals in the afternoon while the Priory was open to visitors; one of the most rewarding aspects of this was the positive response visitors showed in listening to a new work being rehearsed, some even in tears, but overjoyed to hear live music again.''