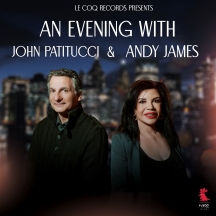 At a time when jazz aficionados around the world have been starved for musical experiences, this recording recreates the sultry atmosphere of a candlelight nightclub as some of the most revered musicians in modern jazz perform classic standards.

"I wanted people to just sit back and enjoy a listening experience of serene pleasure," declares James. "John and I tried to create something easy to listen to that would leave people feeling good afterward. I recorded the album in anticipation that people wouldn't something too complicated at this time we all find ourselves in."

Jazz singing and Flamenco dance have been parallel passions throughout Andy James' life. Flamenco took prominence during what she now refers to as "act one" of her artistic life. She became renowned as a world-class Flamenco dancer, enjoying a successful career dancing with her husband and partner Piero Pata in Madrid.

For "act two," James relocated to the U.S. and focused on her singing career, renewing collaborations with the great jazz musicians who had crossed her path while they traveled through Europe. She and Pata launched Le Coq Records, releasing a series of albums ranging in style from the elegance of the female jazz swing tradition to vintage R&B to the post-bop urgency of the classic Blue Note era.

That rumbling you hear is Norman Granz turning over in his grave. This vocal/bass duo and their wide ranging, well chopped pals deliver the kind of candlelight, late evening set that Granz forgot to make when he had the chance. An utter mind blower, this goes way beyond rec room/mood music---this is the real deal. Absolutely killer stuff.