After 20 years of grinding there comes a time for retrospection. 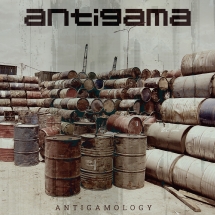 After 20 years of grinding there comes a time for retrospection. "Antigamology" is the first compilation of studio and live songs recorded by ANTIGAMA between 2013 and 2018 that appeared exclusively on the vinyl versions only. In addition to the studio material, the first disc features a full bootleg show from New York's "Saint Vitus" club recorded during the "Depressant Over US Tour" in 2018. Last but not least, there is the unreleased "Noisecore Session" - an avantgarde improvisation recorded by the band in their rehearsal room in autumn 2017. The second "Antigamology" disc is a DVD collection of video clips, reports from the recording sessions, making offs and trailers, plus the full show from Trutnov's "Obscene Extreme Festival" in 2013.