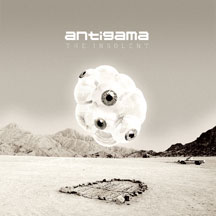 Poland's grandmasters of radical grindcore, ANTIGAMA, have completed the seventh full-length installation of their cutting edge arsenal, "The Insolent", for release through their trusted alliance with Selfmadegod Records. Following the impact of their massive 2013-released "Meteor" album, ANTIGAMA will once again captivatingly scar the planet with the inundation of "The Insolent". Seeing the band further along their ongoing path of progression, "The Insolent" contains another intriguing alloy of their futuristic grind savagery heavily diversified with cosmic exploration and harsh dissonance through ten new tracks of unorthodox, rapid forward-thinking metal. Recorded in February at JNS Studio in Warsaw, "The Insolent" was engineered by Pawel Grabowski, mixed by Pawel Grabowski and the band, and mastered by Scott Hull at Visceral Sound in Bethesda, Maryland (Pig Destroyer, Agoraphobic Nosebleed), the album features a very special guest appearance of the legend of Polish electronic music scene, WÅ‚adysÅ‚aw "Gudonis" Komendarek, and bears cover art designed by Bartek Rogalewicz.