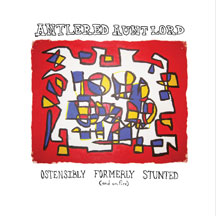 Antlered Aunt Lord is entirely Jesse Stinnard, a guy who's spent the past ten years in Athens, Georgia as a cherished eccentric in a town known for its cherished eccentricities. HHBTM is honored to bring Stinnard's tuneful genius into the light with his first official release. Antlered Aunt Lord is everything today's music is not--melodic, lyrically inventive, reticent, and moving. Songs so catchy they sound like they emerged fully-formed from the radio, with lyrics so mysterious they sound like they emerged from your dreams. This is the prophet sharing--the missing link between the Pixies and The Byrds if they'd been raised in the Appalachians.