Anton Bruckner: The Making Of A Giant

The full-length cinema film about a long time underestimated composer is released for the first time on Blu-ray. 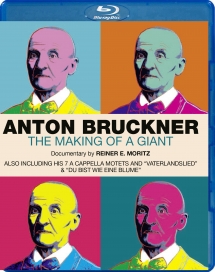 Underestimated by his contemporaries, but today acclaimed as one of the greatest and imaginative composers of his time. Anton Bruckner was a genius of tones. This will be the first in-depth documentary about the composer which explodes many of the myths and prejudices cultivated by his detractors during his life time and subsequently. It is a story from rags to recognition told by those who have intimate knowledge of Anton Bruckner and his work. Such great conductors like Kent Nagano, Valery Gergiev and Simon Rattle let the composer come alive in the documentary „Anton Bruckner - The Making of a Giant" telling the ups and downs of life through his music. Using the opportunity of drawing on Gergiev's recording of the Bruckner Cycle with the Munich Philharmonic for Telmondis, contributions from the Florianer Sängerknaben, organists at St. Florian, Linz and the Vienna Court Chapel as well as the conductor of the Linzer Singakademie (formerly Bruckner's Liedertafel Frohsinn), we gain insights into the work of the composer. We visit his birthplace, hear about his teaching assignments, his triumphs as organist in France and England, his relationship with Wagner and the diffi cult times in Vienna, where he spent the latter part of his life. Including 7 A cappella motets and the two motets VATERLANDSLIED and DU BIST WIE EINE BLUME