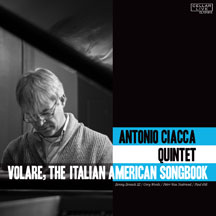 When I was running the Cellar, I was approached by pianist Antonio Ciacca about presenting Italian Jazz Days at the club to showcase the musicians and songs from the great American-Italian songbook. I couldn't make it happen then.. In October 2015 Antonio brought a group to Vancouver: Antonio (the only 100% Italian in the group); bassist Paul Gill; drummer Peter Van Nostrand; and trumpeter/vocalist Benny Benack III. The lone non-Italian in the group was yours truly. I call myself an honorary Italian. We performed one night at the Italian Cultural Centre and then went in the studio to make Volare, The Italian American Songbook. We had an absolute ball making music together. The only new name to me in the group was Benny Benack III. He is among the young musicians living in New York who display an abundance of maturity in their playing. Benack III does not sound like a 25 year old. He has so much respect for the tradition, which is wonderful and unusual to see these days. Drummer Pete van Nostrand is a mainstay on the New York jazz scene and most recently can be heard playing with CÃ©cile McLorin Savant. His drumming always subtly pushes you and has a very nice feel to it. He isn't a stranger to Cellar Live, having recorded on Steve Einerson's Arrival. Bassist Paul Gill, who also played on that recording, is the bassist of choice for numerous New York musicians. It's no secret why. He has a huge bass sound with that bounce that I love in a bass player. When it's his time to solo Paul displays the technique of a horn player, especially when he's using the bow. The leader of this group, Antonio Ciacca, has been living in America for nine years. He is a confident bandleader who knows exactly how he wants the music to sound and isn't afraid to tell you if he's not getting what he wants. That's the way it should be. Although he is a fantastic soloist, it's Antonio's subtle arranging and thoughtful accompaniment that really stand out for me on this recording. .