A HILARIOUS COMEDY FROM THE CREATORS OF 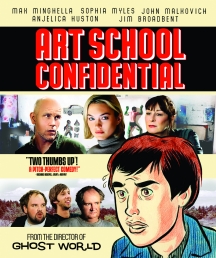 ART SCHOOL CONFIDENTIAL follows talented young artist Jerome Platz (Max Minghella, The Social Network) as he escapes from high school to a tiny East Coast art school. Here the boyish freshman's ambition is to become the world's greatest artist, like his hero Picasso. Unfortunately, the beauty and craft of Jerome's portraiture are not appreciated in an anything-goes art class. Neither his harsh judgments of his classmates' efforts nor his later attempts to create pseudo-art of his own win him any admirers. But Jerome does attract the attentions of his dream girl, the stunning and sophisticated Audrey (Sophia Myles, Transformers: Age of Extinction), an artist's model and daughter of a celebrated artist. Rejecting the affectations of the local art scene, Audrey is drawn to Jerome's sincerity. When Audrey shifts her attention to Jonah (Matt Keeslar, Scream 3), a hunky painter who becomes the school's latest art star, Jerome is heartbroken. Desperate, he concocts a risky plan to make a name for himself and win her back.

Curiously, this relentlessly cynical tone turns out sounding refreshingly original compared to the usual pieties in the genre.

No matter which is the real imitator, life or art, Art School Confidential does its own fine job skewering both.

Art School Confidential may not have the 'street cred' of either Ghost World or Crumb, but it's a rather interesting and at times kind of cheekily provocative outing that has some wry things to say about contemporary culture in general and the art world in particular. Recommended.