Award winning documentary about one of the last remaining drive-in theaters in the country, The Mahoning Drive-in. 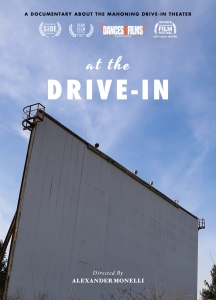 From sleeping in the concession stand to working entirely for free, the quirky film fanatics at the struggling Mahoning Drive-in face uncertainty when Hollywood announces it will switch to digital projection for all new movies. Unable to purchase an expensive digital projector, the Mahoning gang pin their hopes of survival on showing only vintage 35mm film prints on their original 1949 projectors. Relive their underdog story to save film, the Mahoning Drive-in, and drive-in theaters everywhere. At The Drive-in is a documentary about the magic of movies and the people who love them.

At The Drive-in is something every film lover should see.

One of the best new documentaries... At the Drive-In is highly recommended.

There's more humor, charm, emotion, drama and thrills in director Alexander Monelli's love letter to.. the love of film and the treasured places we see them in, than there is in most of Hollywood's big studio blockbusters of late!

It is what Monelli is able to do with the theme of community that ultimately allows this documentary to go from polite entertainment to something somewhat more substantial.