Brimming with anguish, regret and yearning, the album ranges from goth to folk, torch songs to guitar driven indie-rock. 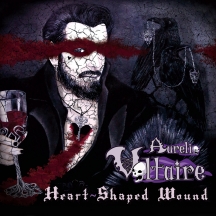 Leaving the vampires, zombies and murder ballads behind, Aurelio Voltaire launches a heart-wrenching collection of songs about love gained and love lost. His eleventh studio album from 2017 (and first Projekt release in a decade) sees Voltaire crafting his most mature and passionate release to date.

Throughout his 20-plus-year career Voltaire has danced on the dark side with a sardonic smile, penning such tunes as “Ex-Lover’s Lover” and “Vampire Club.” He’s best known for “When You’re Evil” (from 1999’s debut The Devil’s Bris), a jaunty celebration of naughtiness befitting a Disney villain. Another classic track, “Brains!” (from 2002’s Boo Hoo) recounts an evil meteor hungry for human brains and was featured on the Cartoon Network show The Grim Adventures of Billy and Mandy.

With a reputation for macabre, tongue-in-cheek skewering of everything from religion to the Goth scene to Star Trek and Star Wars, Voltaire has his serious side, too. Every once in a while someone comes along and breaks his heart, and the result is an album of gut-wrenching songs. His 2002 outing, Boo Hoo, was a breakup record for lonely hearts with an ax to grind.. And it’s happened again! Heart~Shaped Wound goes past 8.9 on the heartbreak scale. Following a short but tumultuous three-month relationship, Voltaire found himself writing new songs that were earnest, brimming with anguish, regret and yearning. Continuing to defy classification, the album ranges from Goth to folk, from saxophone fueled torch songs to guitar driven indie-rock.

Often described as a modern day renaissance man, Aurelio Voltaire is a singer/performer, creator of comic books, animation and toys. He can now be seen in his informative and hilarious YouTube series, Gothic Homemaking. Best described as Pee Wee’s Playhouse for spooky kids, in this show he demonstrates how to turn your boring apartment into a gothic lair.