B3 Kings - Laughing All The Way

The B3 Kings put the fun back in Christmas! 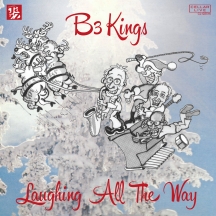 After 12 consecutive years of touring at Christmas, the B3 Kings sleigh was derailed in 2015 when Denzal Sinclaire was asked to be a part of The Lincoln Center Jazz Orchestra's Big Band Christmas tour. I secretly thought that this might be the end of the B3 Kings. The band never talks about the following year's plans, and then I'll get an inquiry about a gig for the following year, send out an email to the guys and if I get a unanimous 'yes' in response, we go from there. In a way, I think that is what makes this band so special. We treat every gig like it might be one of our last. I think everyone enjoyed the break last year, and we decided that if we were going to do it again in 2016, we'd need to re-kindle some excitement in the band. Hence, "Laughing All The Way", the band's third Christmas CD. The wacky musical minds of Chris, Bill and Denzal once again worked their magic in the studio, writing and arranging tunes on the spot and having so much fun in the process. We even wrote a couple of catchy Christmas originals this time around. Merry Christmas from the B3 Kings!